Led by the amazing infield defense of Greg Hazelquist at 3rd, Ron Keil at shortstop, Bob Bronson at 2nd, Ed Jackson at rover and the rookie, Mike Allen at 1st base the Dana Allstars completely dominated the La Mesa Allstars in a 29 to 17 win today at our Dana home field.

Dana batters pounded out 37 hits in 8 innings including homeruns by Greg, Mike Rask, and Bill Luksic who hit a grand slam in the second inning.

Mike Rask made the defensive catch of the day (https://youtu.be/vkoWUFpyBBA) with an amazing play in center field. Rich Tapia and Terry Ball both pitched well and prevented the La Mesa team from getting any big scoring innings. Thanks to league president Dave Hunt for organizing the game and serving as team manager. A special thanks to Sal Yepiz for being honorary manager and scorekeeper. And thanks again to Norm Young for providing us with the best field in senior softball.

Click on Rosters to see which team you are on! New schedules are posted and have been sent to managers. First game is July 10. Don’t forget the Family/Exhibition & All Star Games (plus BBQ) this Saturday July 3. 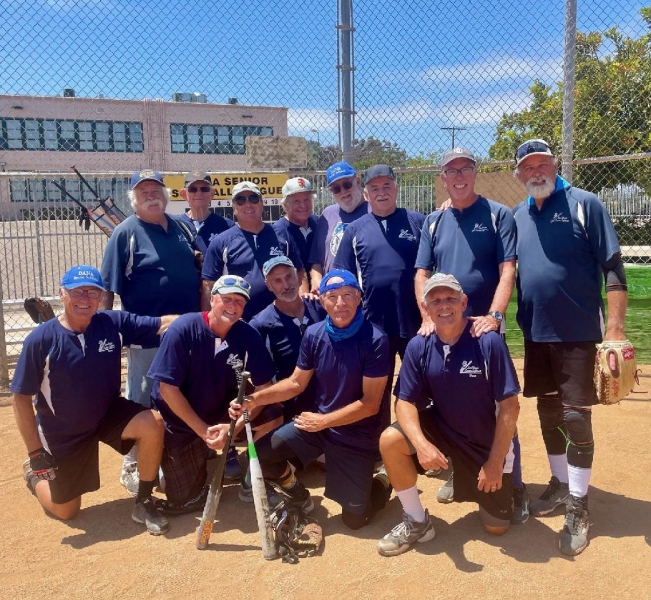 With winning margins of 27 – 13 and 25 – 4, Navy Blue left no doubt as to who was the best team in the playoffs. In the second game, going into the open inning with a comfortable six run lead, Dann Crawford’s team scored 15 more, resulting in the Harbortown Sliders being eaten by random passersby when it seemed no one was going to show up for the post game party.

Party afterwards at Harbortown Pub. Please RSVP (look for an email on Tuesday) so we have a headcount.

By the slimmest of margins Green Storm edged out Navy Blue and Red (tied, 1/2 game back) to claim first place with a record of 8 wins, 4 losses and 2 ties. In Green’s final four games they had two ties and two one-run victories.